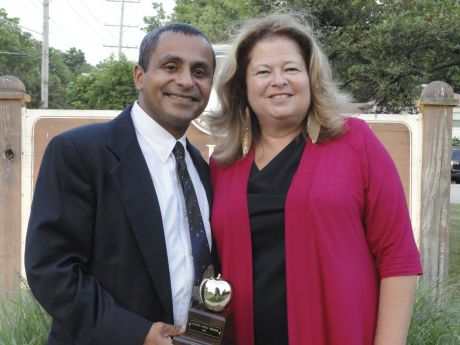 In 2010, the HPCF and a local family foundation initiated an annual Highland Park Golden Apple Award to recognize outstanding teachers in the Highland Park school systems. By honoring an exceptional educator, the Foundation strives to demonstrate the strength and impact of excellent teaching in helping young people to reach their potential. The award winners will receive grant money, a laptop computer or iPad and recognition throughout the community.

Anyone who has experienced a graduation knows the moment is bittersweet– as students, we step off the stage now labeled “alumni” as our families fill with both pride and anxiety. Students leave the venue with diploma in hand and excitement in heart as we move forward into the next phase of life. Graduation didn’t sink in, for me, until July 18th (almost two months late!), the date of the school board meeting recognizing my physics teacher, Mr. Kunal Pujara, for winning the Golden Apple Award.

Although it seems like it goes by in the blink of an eye, high school is a long road for everyone. The ups and downs and twists and turns blur our abilities to truly appreciate the gift of education given to us (at least, they did for me). Until we have an opportunity to recognize it. I was one among many who nominated Mr. Pujara for the award for his outstanding teaching.

Because of Mr. Pujara, I’d like to say I gained a pretty good knowledge of physics and how the world works, but I also gained an invaluable perspective on perhaps some of the greatest, most effective teaching methods out there. And for that I am truly thankful. Further, Mr. Pujara invited his 3rd grade teacher, Mrs. Louise Paris, to the ceremony, the one who inspired him with her teaching methods. She wrote, of the night, “When Kunal approached the podium with his Golden Apple Award, he diverted the attention from himself to me, reading his nomination essay that was all about his third grade teacher. Even during pictures, he insisted I be at his side holding the Golden Apple Award between us…With that being said, my teaching career has come full circle. That night offered a defining moment in my life, more than I could ever ask for…the realization that I truly made a difference in one child’s life…” From this, I can see why Mr. Pujara loved her so much, and furthermore, why he so deserves the award.

Fast forward. I’m in O’Hare airport with my mom and my brother Jonny, and I spotted a man carrying a bag with the Golden Apple logo on it. I asked the man if that bag was his, and he replied with a smile, “Yes. I’m Scott Reed, a Physics teacher at Niles North High School and I’m actually going to a conference right now on science educational standards.” Believing this in itself was a coincidence, I told him my Physics teacher too had won the Golden Apple Award this summer. Enthusiastically he said, “Kunal Pujara? I was on the committee that observed his classes. He really did deserve it. What a small world.” I agreed, and congratulated Mr. Reed again on his accomplishment.

It’s indeed a small world, but that’s not the only conclusion I’ve reached from this entire process of humble teachers and gilded fruit. My way of thanking Mr. Pujara for his incredible gifts to me was my nomination, and this caused him to thank his teacher (and I made an accidental connection to another amazing teacher!). To students out there– if you’ve had great teachers, it’s time to thank them. After annoying problem sets and chunky readings through which to churn, teachers give us the limitless gift of learning. Cheesy, perhaps, but true. Maybe I’ll be a teacher someday.

And you can see a student video with news about the award as well, beginning at 3 minutes and 15 seconds.

Watch video here
BACK
Next